Day 1: Arrive at Kathmandu. Upon your arrival at Kathmandu you are greeted by an Easy Tours Facilitator or your guide, and your chauffeur. This itinerary assumes an arrival at Kathmandu by the early afternoon, at the latest. If your arrival is later, an additional night can be arranged at Kathmandu and your touring will begin the next day.
Welcome to an ancient Himalayan nation that offers a fascinating culture, incredible scenery, very warm and friendly people, great trekking opportunities, and a whole lot more. With the exception of congested Kathmandu, Nepal has charming, laid back cities and towns, along with picturesque wildlife parks that are home to many endangered species. 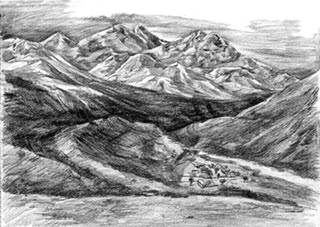 The unfortunate picture (of the effects of the 2015 earthquake) painted by the media, like much of what they do, is severely exaggerated. For example, the three ancient temples, all UNESCO World Heritage sites, in Kathmandu received very little, or no, damage. The three Durbar Square’s (all of which are also UNESCO World Heritage Sites) in the queen cities of the Kathmandu Valley did receive fairly heavy damage, but most of their monuments are still standing and still provide wonderful insights into the local culture over the last millennia.
You are driven to Bhaktapur, a UNESCO World Heritage Site, for a guided exploration. Bhaktapur lies on the way between Kathmandu airport and Nagarkot.
Bhaktapur is a UNESCO World Heritage Site and one of the Kathmandu Valley’s three queen cities, literally meaning The City of Devotees. Although this queen city received extensive damage during the 2015 earthquake, there still is enough remaining to marvel at as you walk around the ancient square with its unique architecture and charming temples. The architecture and culture here is different from what you will experience in most of Kathmandu, as ancient Newari architecture and culture are found here in their purest form.
After this exploration you will be driven to Nagarkot, which is located about an hour and a half drive to the east of Kathmandu. Nagarkot is situated at an elevation of 7135 feet (2175 meters) and offers a panoramic view of the Himalayas. On a clear morning you can see five of the world’s ten highest mountains - Everest 29,028 feet (8848 meters), Lhotse 27939 feet(8516 meters), Makalu 27,765 feet (8463 meters) and Manaslu 26,781 feet (8163 meters), as well as many other summits.
Check-in at the Mountain Resort on your arrival at Nagarkot. Your room will have a balcony with a direct view of the Himalayas. We recommend that you turn in early this evening. Please note that the best time for good visibility of the distant Himalayas is at sunrise.


Day 2: Nagarkot - Dhulikhel. Awaken before sunrise in the morning so that you can take in the amazing vista of the Himalayas. Besides your balcony there are various other locations at the resort that provide a great view, including the large rooftop that is adorned with local plants. Check-out of the resort after you freshen up and have breakfast. Join your chauffeur for the scenic drive to nearby Dhulikhel. Arrive at your mountain resort a little before noon and there is a break for lunch. Unlike Nagarkot, which is a small village set at a distance from your lodge, Dhulikhel is a vibrant Himalayan community with charming Newari architecture and its own unique culture. This scenic town was an important trading post between the Kathmandu Valley and Tibet for many centuries and the views of the Tibetan and Nepalese Himalayas have to be seen to be believed.
Afternoon - proceed for a guided exploration of Dhulikhel. Explore the ancient Newari houses and centuries old settlements like Shrikandapur, as well as some of the ancient temples and Buddhist Stupas. Take in the amazing beauty of your surroundings. Over twenty of the tallest peaks of the Himalaya’s can be seen from different vantage points in the town, including Mt. Lhotse - 27,939 feet (8516 meters) and the spectacular Annapurna - 26545 feet (8091 meters). Return to your boutique lodge after your exploration.


Day 3: Dhulikhel - Kathmandu. Check-out of the resort after you freshen up and have breakfast. Join your chauffeur for the drive to Kathmandu. Arrive at Kathmandu where you are assisted with your check-in to your hotel.
There is a break for lunch.
Afternoon - After lunch 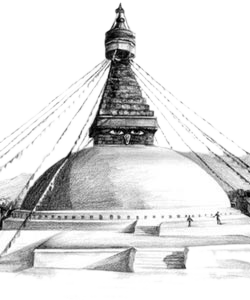 you will visit the Swayambhunath Temple and Pagoda, Kathmandu’s signature monument. With a history that may go back as far as 2500 years, this ancient complex is a UNESCO World Heritage Site. The temple and stupa are built on a hilltop and are visible from most of the Kathmandu Valley. The devout walk up the hill from the base (365 steps), but most tourists prefer to drive up almost all the way up and then use the few steps on the other side of the hill. Although a couple of the surrounding monuments were destroyed/damaged during the 2015 earthquake, the main structure still stands, along with other smaller shrines and monasteries surrounding it.
From here you will proceed for a tour of Pashupatinath Temple, a UNESCO World Heritage Site and one of the most sacred Hindu shrines in the world. Originally built around 2400 years ago, the (now) spectacular temple was reconstructed by a Nepalese king in the 15th century after the original wooden structure was (purportedly) consumed by termites. A lesser known fact among western visitors is that Nepal’s natives are primarily Hindus (over 80%), and Pashupatinath’s surrounding area is dotted with ancient Hindu shrines and ashrams, as well as a steady stream of pilgrims and worshippers. Nepal’s holy river, Bagmati, flows through here and its banks are constant witnesses to Hindu ceremonies for the dead and the living. There is a cremation area where pyres are always present, and our guides will ask you for a mindful approach in these areas. The main temple and most of the surrounding shrines received no damage in the 2015 earthquake. You will return to your hotel after this exploration.


Day 4: Kathmandu. Weather permitting, you have the option of experiencing the Everest flight this morning - you can have us facilitate this with private assisted transfers between the hotel and the airport, or you can save a little money by having your hotel travel desk arrange this as part of their daily group airport transfers. If you decide to take this flight, on your return you will freshen up and have breakfast. If weather conditions result in the flight getting cancelled, this can be substituted for the following day.
Continue your tour of Kathmandu city with the Boudhanath Stupa, a UNESCO World Heritage Site that is one of Kathmandu’s two landmarks. This is the largest stupa in Nepal and a major pilgrimage destination for Buddhists. Said to have been built just after Lord Buddha’s departure from the world about two and a half millennia ago, the stupa has multiple legends associated with it in both Nepalese and Tibetan Buddhism. The influx of Tibetan Buddhists escaping China’s control over the last six decades has influenced the area around it as many of them have settled here, and have also built over 50 Gompa’s (monasteries) around the Stupa. Exploring the stupa and its colorful surrounding areas is a highlight for any visitor to Kathmandu. The spire of the stupa and a few other areas received some damage in the 2015 earthquake and repair work is ongoing.
After the Stupa you will enjoy a walk in Thamel, the main bazaar area of Kathmandu. Thamel is also where a lot of the inexpensive hostels and other budget lodging options are located, and its colorful alleys are always abuzz with activity. Locals and backpackers flock to this area to shop for a vast range of products, from daily requirements to souvenirs, from clothing to footwear to toys. There are also a large number of dining and street food options, ranging from local Nepalese delicacies to western fare.
There is a break for lunch.
Afternoon - Experience a tour of Patan City, one of the three queen cities of the valley. Another UNESCO world Heritage Site, Just like other parts of Kathmandu, although some structures here were damaged or destroyed by the 2015 earthquake, much of the amazing historic site remains, and is more than well worth a visit. Patan is the city of fine arts, and you will start with an exploration of the Durbar Square. The museum here houses a collection of ancient bronzes and religious objects. Other noteworthy monuments are the impressive carvings at the 17th century Krishna Mandir and Mahavihar, and the 12th century Golden Temple of Lord Buddha.


Day 5: Kathmandu - International Flight. You are assisted with your check-out from your hotel and driven to the Kathmandu Durbar Square, another UNESCO World Heritage Site. Some of the ancient monuments here were also damaged or destroyed during the earthquake, but much of it remains intact. The monuments in the Square were built between the 12th and 18th centuries, and this is where most of the state ceremonies are performed up until today. Start with a visit to Kumari Ghar, the abode of the Living Goddess, a beautiful 17th Century three-story building. If you are fortunate, you may be graced with her appearance in an upstairs window. You will explore the ancient square and its many monuments, possibly stopping for a photo opportunity in front of the Kal Bhairav, an ancient and impressive stone relief of Lord Shiva in one of his fearsome manifestations.
From here you are driven to the airport where you are assisted with boarding your international flight to your next destination.
Our services end at Kathmandu airport.