Agra is an ancient city and one of the most popular tourism destinations of North India. While the name of the city finds mention in the classic Indian epic the Mahabharta, the modern city of Agra was established around 1475 AD. Since then Agra has been an important center of art and culture and has even served as the capital of India for nearly one and a half century between 1506 AD and 1658 AD.

Agra has flourished under a variety of governments that have established their hold over India. The city has served as the capital of the Delhi Sultanate as well as the Mughal Empire.

Being the capital of India under the watch of the Mughals benefitted Agra greatly. The City was lavishly decorated with gardens, monuments, mausoleums as well as more functional constructs such as the world famous fort and the Jamia Masjid. Even today, all these monuments continue to make Agra a mainstay of any tour to India.

Undoubtedly, Agra gets the greatest share of tourism traffic in India due to the presence of the Taj Mahal, one of the great wonders of the world. Globally recognized as a symbol of undying love, the Taj Mahal was created by an inconsolable Mughal Emperor Shahjehan, as a mausoleum for his beloved wife Mumtaz Mahal.

However while the Taj Mahal may be the biggest tourist draw for the city, Agra boasts an exhaustive list of major attractions and monuments that unfortunately escape mention due to the sheer matchless magnificence of the Taj Mahal.

Apart from the Taj Mahal, other notable attractions in the city include the iconic Agra Fort, The Itimad-ud-Daulah Tomb (also known alternatively as the Jewelry Box and the Baby Taj), the Jama Masjid, The Taj Museum, Akbar’s Tomb, the many gardens of Mehtab Bagh as well as the ancient markets of Kinari Bazaar just to name a few.

Most of the attractions listed above have a series of sub-attractions within them. Monuments like the Taj Mahal and the Agra Fort are huge complexes replete with multi-faceted features within them such as residences, meeting halls, places of assemblage as well as houses of worship. All of these would require considerable time to see and would enrich any trip to Agra immensely.

In the immediate periphery of Agra is one of the world’s most well preserved Ghost Towns. Originally developed as a sister city of Agra and the capital of the Mughal Empire, the city of Fatehpur Sikri is remarkably preserved despite being abandoned for over five centuries. Fatehpur Sikri along with the Taj Mahal and the Agra Fort make three of the UNESCO World Heritage Sites in the city. Legend has it that the childless Emperor Akbar the Great visited the shrine of the famous saint Salim Chisti in the area to implore him to pray for a successor to the Empire. The saint promised the emperor not one but three sons which came to pass and Akbar moved his capital to the site in honor of the saint.

There are differing opinions as to why the capital was shifted back to Agra in only a few years after the creation of whole new city at the site. Most historians agree that a chronic lack of water in the area precipitated the decision to move the capital back to Agra after the death of Emperor Akbar.

Today Agra is considered as a sheet anchor of any tour to North India and is considered a part of North India’s tourism Golden Triangle. Apart from its many attractions and monuments, Agra is a great place to sample North Indian cuisine. The city has many establishments serving the finest delectable specialties of North Indian, Punjabi, Mughlai and other culinary influences of the region.

Being a center of art, culture and literary development for centuries, Agra has attracted a variety of craftsmen and artisans over the ages. This has led to the development of a fabulous handicraft industry in the city which specializes in art forms of pietra dura, marble carvings and woodwork.

Agra is also the marble capital of the world. The output of the city’s marble industry is greater than any other place in the world. Marble from Agra is sourced by leading companies to be used in construction, ornamentation as well as for a variety of purposes globally.

The city is also a great place to buy Zardozi tapestries, which is made by gold and silver threads as well as semi-precious and precious stones.

As with the rest of India, any trip to Agra needs to be planned around two major weather challenges, namely the searing summers and the extremely wet monsoon rains. This makes the period between October and April the best time to come and tour Agra.

With the weather at its most pleasant during this period, it is a great time to visit the many attractions of Agra. Since any tour of Agra requires walking considerable distances and lots of outdoor sightseeing, avoiding the summers and the monsoon rains ensures that travelers get the most out of their trip to the city.

Many tourists also plan their itinerary of a trip to Agra in time to catch one of the many colorful festivals in Uttar Pradesh. These include Holi, Purnima, the Magh Mela and the Eid-ul-Fitr.

Also when taking a tour of Agra, it is important to plan your visits to monuments at the right time to get the maximum benefit out of the visit. For the Taj Mahal going early in the morning or late at sunset gives you the best photography times and ensures that you beat the throngs of domestic Indian visitors. Furthermore many monuments are closed at certain days of the week so ensuring that you know when to visit each attraction in Agra beforehand can save travelers from needless disappointment. 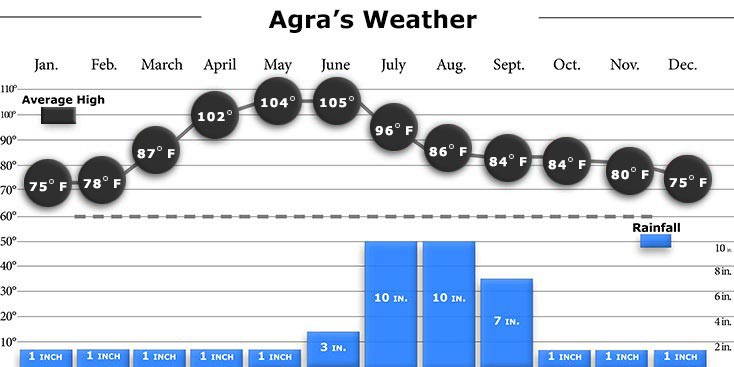 How to get to Agra:

Agra is situated in the western part of the north Indian state of Uttar Pradesh (UP). The city is nearly 200 kilometers away from the Federal Capital of New Delhi.

While Agra has a domestic airport and a new green-field international airport is being planned, there are at present no regularly scheduled commercial flights to the city. For the international tourist traveling to India, the most convenient international gateway to get to Agra is Delhi’s Indira Gandhi International Airport. The airport offers convenient connections and a plethora of airline carrier options.

From Delhi the most convenient way to commence a tour of Agra is by a modern, access controlled, 6 Lane Highway called the Yamuna Expressway.

The drive time between Delhi and Agra on the highway is around two hours and can be traversed comfortably in a luxury vehicle.

It is considered gospel truth in global tourism circles that no tour to India is ever complete without a visit to Agra. The city’s matchless monuments, rich history and cultural window give it a place of unique importance in India.

Any trip to Agra would be of great interest to fans of history, culture, architecture as well as for enthusiasts of romance, poetry and folklore. Furthermore the city is one of the finest places in India to buy genuine Indian art forms such as Pietra Dura (known locally as Parchim Kari), fine woodwork and marble sculptures as well as zardozi tapestries.

Many of these art forms were brought to the city by the artisans who built the magnificent monuments such as the Taj Mahal and are still practiced in their original form by their descendants to this day.

Since most of the monuments and attractions of Agra are either religious sites or mausoleums, most visitors are required to wear respectful clothing which would mean covering of arms, legs and shoulders by travelers of both genders.

Furthermore women travelers may be required to cover their heads when visiting some mosques and temples in Agra as well.