Delhi is India’s national capital and one of the oldest continuously inhabited cities in the world. Most historians agree that the present city has been inhabited since 1000 BC. During the course of its 3,000 plus years of history, Delhi has seen some seismic shifts in its fortunes. The city has been built, ravaged, sacked and re-built at least eight times bearing testimony of the passing of many different world orders and empires.

Even today, the city’s denizens (Delhiites) attribute the city’s un-mitigating growth momentum and resilience of spirit as a corollary of the city’s history. The city has served as the capital of glorious dynasties and empires. These include the Mauryan, the Mughal, the Tomara, the Chauhan and the Slave as well as the British.

Each dominant power of its day, added to the city-scape of Delhi adding to its social mores, cultural landscape as well as architectural palette. This has left the city with a host of magnificent monuments including multiple UNESCO World Heritage sites.

Delhi is home to a colorful tapestry of major monuments, archeological remnants as well as modern iconic buildings. These include the Asoka Pillar, the Red Fort, the Qutab Minar, the Jama-Masjid, the Raj-Ghat (Mahatma Gandhi Memorial), the Rashtrapati Bhavan(Presidential Palace), the Akshardam Temple, Humayun’s Tomb, the modern iconic Bahai Temple and the famous India Gate just to name a few.

Today the city is broadly divided into two main parts simply called Old Delhi and New Delhi. The old part of the city includes the historic quarter as well as the walled city inside the Red Fort. This area used to be the old Mughal capital which is also called Shahjahanabad (named after Shah Jahan - the fifth Great Mughal Emperor).

Alternatively, New Delhi is also called Lutyens Delhi. This part of Delhi was purpose- built as a modern capital by the British imperial administrators of India when the capital was moved to Delhi from Kolkata in 1911.

All of these competing influences over centuries have left Delhi with a unique identity that is pluralistic, multi-cultural, diverse and superbly enriched. Since Indian independence in 1947, Delhi is the heart of the world’s largest democracy which also makes it the home of the world’s largest bureaucracy. The city is filled with architectural monoliths to house Indian officialdom such as the massive Sansad Bhavan (India’s bi-cameral parliament).

Delhi has come to symbolize India’s rise as a power of global significance. The city has grown phenomenally in the last half a century to become one of the largest urban conurbations of the world with over 27 million residents. The city is now a prominent business and diplomatic hub and is home to a growing plethora of international festivals and events that draws millions of tourists to the city.

For the visitor, Delhi has a seemingly endless array of surprises. While the city’s most visible splendors are its monuments, Delhi is home to a multitude of museums, galleries, events as well as world class shopping opportunities.

The city is a great place to start a culinary expedition of India as well. The diverse culinary scene of the city has its own unique flavors and also combines the very best of North Indian cuisines including Mughlai, Rajasthani, Punjabi and Marathi.

The period between October to March is undoubtedly the best time to be in Delhi. The weather in the city is comparatively pleasant and the searing summers as well as the inundating monsoon rains do not disrupt any tour of Delhi.

In recent times, many visitors align their travel itineraries to include the many colorful and cultural festivals that fill the social calendar of the Indian capital. These range from the traditional religious festivals such as Diwali and Dussehra to more modern festivals such as the Annual World Book Fair and the Delhi International Art Festival. 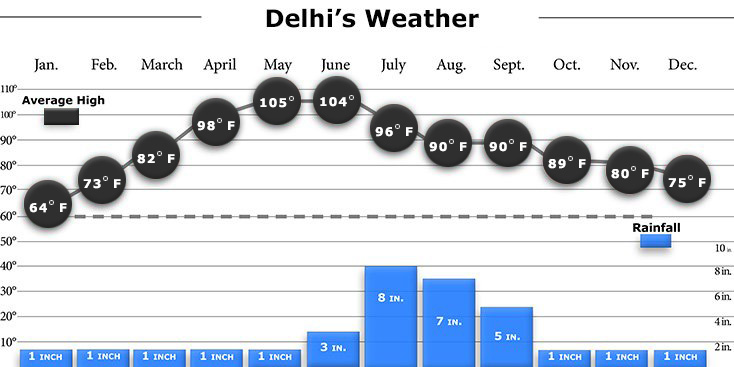 How to get to Delhi:

Delhi is situated in the north of India and is a federally administered territory located ideally between the states of Uttar Pradesh, Punjab and Rajasthan. All three states are amongst the most popular destinations with international tourists visiting India.

The city is serviced by the Indira Gandhi International Airport, the largest aviation hub not just in India but also in the entire South Asian region. The airport is modern and connects Delhi to over 100 international destinations conveniently through a variety of international carriers.

First time visitors often find Delhi as the perfect springboard to commence their exploration of India.

Being the fast-paced pulsating heart of modern India, there is something for everyone in Delhi. People interested in history and culture can immerse themselves in the multitude of historical sites and museums that are scattered across the city. For the religious and mystically inclined there are visits to any number of temples, mosques and houses of worship of the many religious communities that call Delhi home.

Fans of shopping will find immense value and great bargains in the city’s markets that range from local bazaars, centuries old street markets all the way to the most modern shopping emporiums.

In a nutshell, it is extremely unlikely that anyone wanting to experience India would not find something of interest in Delhi.

Since Delhi has a tropical climate for most of the year apart from the October to January winter months, loose cotton clothing is the best sartorial choice when exploring the city. The city’s pluralistic and cosmopolitan character ensures that western wear and casual clothing are acceptable at most places.

However guests should be mindful that India is a deeply traditional and religiously devout society which puts great value on modesty. When visiting temples, mosques, national monuments and historic sites, both male and female visitors should cover arms, legs and shoulders.