Chettinad is a region in the South Indian state of Tamil Nadu which is famous for its unique history, architectural brilliance and signature attractions. The Chettinad region is a collective of 76 rural communities with the town of Karaikudi being the region’s principal urban center.

The Chettinad region was developed over 400 years ago and came about due to the migration of merchant communities from the Tamil coastline that were displaced by periodic cyclones and Tsunamis. These merchants then moved on from their traditional sea-faring professions to become financiers of trade, moneylenders as well as entrepreneurs and agriculturists. The result of this migration to the Chettinad region resulted in the development of a unique and vibrant community that is unlike any other in India. Today the Chettinad region is home to over 22,000 mansions,over half of which are still maintained in immaculate condition.

The mansions of Chettinad are the region’s signature attraction and are popularly dubbed as the “Wedding Cake Houses of Chettinad”. The reason for this is the extravagant and colorful decorations and embellishments of these structures.

The mansions of Chettinad are of varying sizes depending on the prosperity level of its owners. The mansions include large open spaces, generous use of a variety of construction materials, high ceilings, large windows and a number of building features along with a liberal sprinkling of color that make them a sight to behold.

Being a vibrant community that had strong sea-faring roots as well as a culture of financing international trade in the region, the residents of Chettinad had access to a plethora of building material from around the world and used it lavishly in their mansions. Even today one finds amazing structures among the mansions of Chettinad that are replete with the finest Italian marble, Burmese teak, Belgian chandeliers, French crystal and European granite.

The immense wealth of Chettinad’s merchants and a sense of taste and discernment led to a signature style building spree in the region that was uniquely local in execution while relying globally on input. This above all fascinates visitors from around the world and an increasing number of foreign tourists are making their way to Chettinad as part of a larger tourism trek through Tamil Nadu that includes other popular destinations such as Chennai, Mahabalipuram, Tanjore, Trichy and Madurai as well.

The town of Karaikudi is the most convenient base to commence a tour of the Chettinad region. The town gets its name from “Karai” which is a thorny bush indigenous to the area.

Some of the oldest and finest mansions of the town serve as heritage hotel properties where visitors can relax in pampering luxury and the signature resplendent décor. Chettinad mansion hotels are also a great place to experience the unique cuisine of the Chettinad region which is unlike any other in India. Guest can also take a few cooking lessons and try their hand at creating classic Chettinad dishes served on a traditional banana leaf platter. Karaikudi, along with some other locations in Chettinad have been declared as official “Heritage Towns” of Tamil Nadu thereby ensuring that their amazing historic architecture is protected by the Government. Karaikudi has also made an appearance on UNESCO’s “Network of Indian Cities of Living Heritage”. 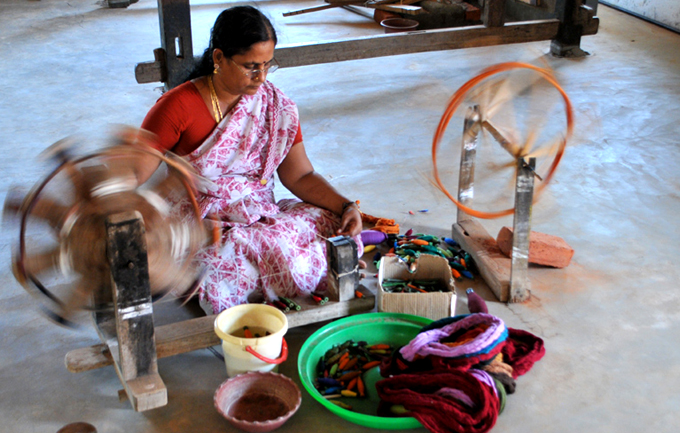 While the different mansions of the Chettinad region are the main attraction of the area and are the subject of most trips to the region, there are other accompanying attractions that add considerable value to any tour of Karaikudi and Chettinad.

There are some ancient temples in the area that may be of interest to some visitors. These include Pillayarpatti Karpagavinayagar temple and the Thirunayam Permual temple.

Chettinad is also a center of excellence for tile making in South India. Chettinad tiles are made by hand through an interesting process that has remained unchanged for hundreds of years. Chettinad tiles are used across India mostly for decoration and embellishment and are always in high demand. Visitors can go to a tile manufacturing center and see the fascinating way in which these skilled tile makers create amazing designs on tiles right in front of their eyes.

Similarly Chettinad is also famous for its hand-loom made fabrics. Visits to handloom factories are also a popular activity for visitors on a tour of Chettinad and Karaikudi.

Any tour of the Chettinad region needs to account for two of India’s greatest seasonal challenges, i.e. the monsoon rains and the summer temperatures. Chettinad - Karaikudi getthe greatest rainfall during mid-October to mid-December as a result of the annual Northeastern Monsoon weather pattern.

This makes the period between December to April the most popular time to visit Chettinad.

The climate for most of the year remains hot, humid and tropical with temperatures peaking during May to July. Many visitors touring Chettinad time their trips to coincide with many of the prominent cultural festivals and events that are being held in other cities of Tamil Nadu such as Chennai, Madurai and Mahabalipuram.

How to get to Chettinad and Karaikudi:

Chettinad is a region of 76 rural communities as well as the town of Karaikudi. Chettinad is in the south Indian state of Tamil Nadu.

Most international tourists visit Chettinad and Karaikudi as part of a greater tour through South India which includes attractions in nearby cities like Tanjore, Trichy, Kanchipuram and Madurai. The most convenient international gateways to reach Chettinad are the principal aviation hubs of south India either in Chennai or Mumbai. Both airports offer a multitude of international connection options and full service facilities.

From either of these locations, most visitors fly to Madurai which is a closest airport to the Chettinad region and the site of some of India’s most amazing temples thereby kicking off their tour across South India.

Chettinad with its interesting backstory would be of interest to fans of culture, architecture, arts and crafts as well as history.

Chettinad is a center of excellence for the traditional handmade tile industry of Tamil Nadu as well as for its famous hand-loom fabrics. Both of these are made by processes that have remained unchanged for centuries and make for some great souvenirs.

Tours of tile manufacturing and hand loom cottage industries are included in all tour itineraries of Chettinad. These tours are extremely popular with visitors who can interact with the skilled artisans and watch them make these colorful and intricately designed tiles through an ingenious process right before their eyes.

Chettinad in recent years has also become a hot-spot for culinary tourism in India. The cuisine of Chettinad is unlike any other that travelers experience while touring India. Chettinad cuisine is famous for being less spicy than other Indian cuisines. Also there are some amazing signature innovations to Chettinad cuisine such as the use of Banana Leaf platters that also make it a point of interest for visiting tourists to the area.

Chettinad as a whole is a very laid back region with an idyllic pace of life. Chettinad is in Tamil Nadu which is one of the most progressive and intellectually vibrant states in India. Western wear, albeit with arms covered and not too figure hugging will hold visitors in good stead when touring the many attractions of Chettinad including its world famous mansions.