Varanasi is one of the oldest continuously inhabited cities of the world and one of the most popular tourist destinations of North India. The origins of Varanasi can be traced as far back as the year 1200 BC. The city however has been destroyed and re-built several times over because of attacks by a spate of conquerors interested in sequestering Varanasi’s immense wealth. Varanasi today is the pulsating heart of the Hindu religion and the unquestioned religious epicenter of India. Called the city of temples, knowledge and lights, Varanasi is one of the seven holiest cities in the Hindu religion. This makes the city a microcosm of India and gives the visitor a matchless insight into the dominant religion and social mores of the country.

Visitors on a tour of Varanasi can expect a thrilling rollercoaster ride that is replete with exposure to instense religious ceremonies, serene rituals as well as a colorful landscape dotted with temples, mosques and other heritage architecture.

Varanasi is of particular importance to devout Hindus. The city is on the banks of the Ganga (Ganges) River. This makes it a place of constant pilgrimage where devotees come to pray and bathe in the holy waters of the river. Hindus believe that bathing in the Ganga can wash away a lifetime of sins. The other major belief surrounding Varanasi is that dying in the city breaks the Hindu reincarnation cycle of birth, death and rebirth thereby ascending the soul to “Moshka” which is eternal peace. This makes Varanasi one of the largest public cremation grounds in India as well as home to a thriving hospice community.

For the visiting tourist, any tour of Varanasi commences at the spiritual center-point of the city which are the Ghats. The Ghats can be defined as a long stretch of steps leading to the western bank of the Ganga River. While the Ghats are a beehive of activity with religious ceremonies being performed all day long, the best time to witness the pinnacle of these ceremonies is either at sunrise or sunset.

Visitors can take boat rides along the many Ghats of Varanasi and see a flurry of activities ranging from women discreetly taking baths while still wrapped in their saris, male devotees and ascetics taking bold dunks to immerse themselves in the river as well as babies being christened by the riverside. Another common sight at some of the Ghats is the presence of funeral pyres of recently deceased Hindus as well as of kin scattering the ashes of their recently deceased relatives in the holy waters of the Ganga.

There are two major religious ceremonies at the Ghats at sunrise and sunset respectively. The sunrise ceremony is called “Puja” whereas the sunset ceremony is termed as “Ganga Aarthi”. Both ceremonies have interesting rituals and are must see events for visitors touring the Ghats by boat.

There are over 80 Ghats in Varanasi. While some Ghats are exclusively for private ceremonies and are reserved familial spaces; others are open to the public. Each Ghat is an interesting site in its own right and has a local legend or story attached to it. Each of the major public Ghats in Varanasi has a name such as Dasaswamdeh, Assi, Tulsi, Bachraj, Shivala, Dandi and Hanuman Ghats. Some Ghats such as Marnikarnika and Harischandra Ghats are famous as cremation grounds. Some Ghats have associated temples or attractions near them such as Balraj Ghat which is the site of three Jain temples. Similarly, the Meer Ghat was built by the Nepalese Royal family and has an interesting temple famous for its erotic sculptures in its periphery. Other prominent attractions at the Ghats include Charanpaduka Ghat that has a footprint that Hindus believe belongs to the deity Vishnu. In a surprising twist of religious pluralism, one of the Ghats, the Panchganga Ghat is dominated by the structure of the historic Alamgiri Mosque, one of the largest places of Muslim worship in Varanasi.

Beyond the Ghats, Varanasi has many other attractions as well. These include the impressive Ramnagar Fort and Museum. The fort is the site of the annual Ram Leela Drama Festival and the accompanying museum has an interesting collection of vintage cars, weapons as well as an interesting astrology clock. Another attraction that is popular with visitors and is in the periphery of the Ghats is the Marnikara Well. Legend has it that the well was created when Lord Shiva stared to dig the earth at this location in order to recover a lost ear-ring of his consort the Goddess Parvati. Hindus believe that the divine sweat of Lord Shiva filled this eternal well thereby making the Marnikara Well a point of pilgrimage in Varanasi.

The Ghats at Varanasi and the Ramnagar Fort are open to all visitors. However a number of the attractions in Varanasi including some temples are open only to practitioners of the Hindu faith and have restrictions on photography as well. Prominent attractions in the city that only allow Hindu visitors the right of access include the historic Vishvanath Temple, which is dedicated to the worship of Lord Shiva and is made out of 000 kilograms of solid gold. Another attraction open only to Hindu visitors is the Gyan Kupor Well. Devout Hindus attribute great qualities to the waters of the well and therefore it is another important point of religious observances in the city.

Varanasi is located in the eastern part of the North Indian state of Uttar Pradesh and has a sub-tropical climate. The city is subject to great temperature variance between summers and winters and has a reputation in India for very hot days and very cool nights sometimes during the same season.

The city gets its share of the annual Monsoon rainfalls between July and October, therefore the best time to visit Varanasi for foreign visitors is during the traditional high tourist season in India between November and April.

Being one of the spiritual anchors of the Hindu religion, Varanasi is the site of a number of colorful festivals that are celebrated with considerable fervor across the city. Prominent festivals include the traditional Hindu celebrations of Diwali, Dussehra, Holi, Raksha Bandhan and Janasthami. Another major festival that has been of considerable interest to foreign visitors is the Purnima Festival, which celebrates the birth of Buddha and is a major event in the nearby town of Sarnath in Varanasi’s periphery. 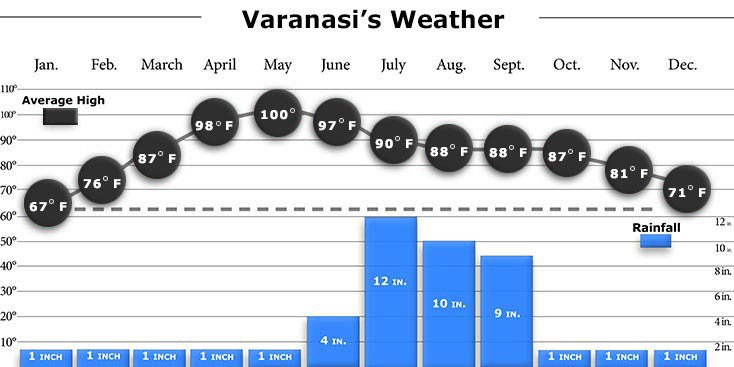 How to get to Varanasi:

Varanasi is situated in the eastern part of the north Indian state of Uttar Pradesh (UP). The city is nearly 000 kilometers away from the Federal Capital of New Delhi.

Varanasi does have its own international airport called the Lal Bahadur Shastri International Airport but it offers extremely limited international connections within South Asian nations only. The airport functions better as a domestic airport connecting Varanasi with various Indian cities.

The most efficient way to reach Varanasi is to fly to the major international aviation hub of north India in New Delhi and take a convenient connecting flight to Varanasi. The flight-time between New Delhi and Varanasi is around one hour.

Varanasi is considered the cultural heartland of the Hindu religion and is often called a microcosm of Hindu India. The city is an immense fresco of strong sensations and is a sight to behold. Most foreign visitors agree that a journey to Varanasi and a boat ride along its Ghats is by far the best experience to understand the true spirit of India.

Varanasi with its pronounced spirituality and history is bound to be an amazing journey for enthusiasts of religion, culture, history as well as mythology. The city and its near constant stream of religious ceremonies and icons will provide interesting subjects for fans of photography and videography.

Visitors seeking indulgence in food and drink will find Varanasi to their liking. The city is a great place to sample the wonders of North Indian cuisines ranging from Mughali, Punjabi as well as traditional Hindu vegetarian fare.

The food in Varanasi is known for its extensive preparations and is famous for its liberal use of spice, condiments and large servings. Varanasi is also the Lassi capital of India and is one of the places in the country where eating fruit is one of the gastronomic passions of the populace. Varanasi is also one of the best places to discover and eat many of India’s world-famous mango varieties during summers.

For the shopaholic, Varanasi has much to offer. The city is a world famous center for silk textiles and brocades. The Banarasi Saree is famous the world over and is much sought after by women of South Asian heritage across the world. Other major must-have souvenirs of Varanasi include silk scarves, pashmina shawls, traditional wooden musical instruments like the Tablas and the Sitar, brass ornaments, Bhadohi carpets and traditional gold jewelry.

Being the spiritual heartland of the largest religion in India, one can never be too far from conservatism in Varanasi. Nearly all of the city’s attractions are religious in nature and are sites of extensive ceremonies at different parts of the day. Visitors should therefore wear clothing that is appropriate to the weather during their stay and ensure that arms, legs and shoulders are covered. Also clothing that is too form fitting should ideally be avoided.

Certain temples and shrines in Varanasi have sections that are only open to the members of the Hindu faith and will not allow visitors beyond a certain point. Also photography at some of the locations may be prohibited. Some locations may require guests to remove shoes and for women to cover their hair. Therefore wearing slip-on shoes and carrying headscarves might be convenient for visitors.

Blog - Varanasi
Varanasi: An Abode for the Soul