Day 1: Bangalore - Mysore. This day can be scheduled based on an arrival at Bangalore in the mid-morning (there are multiple flights to Bangalore from every large Indian city), or a tour of Bangalore city for guests that are already in Bangalore.
For Guests already in Bangalore on this day - check-out from your hotel in the morning and proceed for a half day guided city tour of Bangalore. Take a drive around the modern metropolis and enjoy a brief walk through Cubbon Park, which is a century and a half old park made up of 300 acres of beautiful gardens in the heart of Bangalore. In the park you will enjoy a guided tour of the Karnataka Government Museum and Venkatappa Art Gallery. The museum is one of the oldest in the country and was established in 1886. It contains priceless relics from the prehistoric Mohenjo-Daro period and terracotta from Mathura. The Art Gallery is part of the museum and has about 600 paintings from major artists. Finish your exploration of Bangalore with a photo op at the Vidhan Soudha, the impressive granite structure that houses the state legislative complex.
For Guests arriving in Bangalore in the mid to late morning – you are greeted at the airport and introduced to your chauffeur, who will accompany you throughout your exploration of Karnataka.
There is a break for lunch.
After lunch you are driven to Mysore. On the way, stop at Srirangapatna for a guided tour. This town is located on an island in the middle of the Cauvery River and was the capital of the famed conqueror Tipu Sultan in the 18th century. One of India’s epic battles took place here in 1799 and this battle is now known as the Battle of Seringapatam. The famous Ranganathaswamy Temple dominates the town and was originally built in the 9th century, with additions made in the 12th century. Enjoy a brief exploration of the temple complex as well as a tour of Tipu Sultan’s summer palace, and its beautiful painted wallpaper. Arrive at Mysore and check-in at your hotel.


Day 2: Mysore. Explore the main tourist attraction of Mysore - The Mysore Palace, an incredibly opulent structure that is one of the most impressive palaces in the world. You'll be amazed by its sheer size, 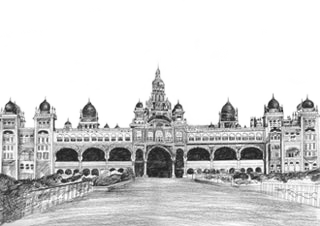 the incredible richness of its interior, and the beautiful facade of this Indo-Saracenic architectural gem. It was the seat of the Maharajas of Mysore, and the current version was commissioned in 1897 and finished by British architect Henry Irwin in 1912.
There is a break for lunch.
Afternoon - Enjoy a guided exploration of Mysore’s other attractions. Drive up the hill to the temple of Chamundeswari, Mysore’s patron goddess. The 12th century temple overlooks the city and has several granite statues of Nandi (The Bull), including one that is over 15 feet high and 24 feet long. After the temple you pay a visit to St. Philomena’s church, one of the largest churches in India. Built in 1933, its design was based on the Cologne Cathedral in Germany. Most visitors marvel at the Victorian Gothic architecture of this active place of worship. At the end of the day, before returning to your hotel, you will enjoy a walk through the local flower and fruit market.


Day 3: Mysore - Chikmagalur. Check-out from your hotel and then proceed on the drive to Chikmagalur. This is a scenic drive through the Western Ghats and you will get multiple photo opportunities of scenery and rural life. Check-in to your hotel upon your arrival at Chikmagalur.


Day 4: Chikmagalur. Today you will experience guided visits to both the amazing Chennakeshava temple (dedicated to Lord Vishnu) at Belur, and the Hoysaleswara temple (dedicated to Lord Shiva) in Halebidu.
India is a land where incredible stone architecture and sculpture abound, more so than any nation on this planet. There are UNESCO World Heritage Sights such as Ajanta & Ellora, Hampi, Khajuraho, the Sun Temple, and literally scores of others that, if they were located in most other nations, would be that country’s most valued ancient site. The temples at Belur and Halebidu have the most amazingly intricate carvings of all the sites in India. Because these artists worked in soapstone, a much softer stone than the traditional granite or other hard rock used in places like Hampi, Ajanta & Ellora, or Khajuraho, they were able to achieve a level of intricate detail that is unrivalled on this planet. No written words or pictures can describe the achievements that were made by these artists about 900 years ago – you have to personally experience the temples with the help of an Easy Tours’ guide, to be able to truly appreciate the intricacy and the incredible volume of creativity at Belur. The temple took many generations of skilled sculptors well over a hundred years to create.
There is a break for lunch.
After lunch you will drive about 45 minutes and your guide will continue to astound you as he explains the intricate details of the carvings that adorn the surface of the Hoysaleswara Temple. This temple rivals or exceeds the incredible temple at Belur in its intricate carvings and sheer volume of work. The stones form a canvas depicting Hindu Deities, epic stories from the Mahabharata, mythological creatures as well as more recognizable flora and fauna. Of the thousands of incredibly detailed carvings, no two are alike and each one is a masterpiece on its own. Again, just like in Belur, not an inch of the surface was left untouched, and you will be unable to comprehend how the sculptors were able to carve such incredible detail in even the least accessible crevices and nooks of the structure. Also built over 900 years ago, work on the temple was stopped after 86 years and hence it is considered an unfinished temple complex.
Return to your hotel after your tour.


Day 5: Chikmagalur - Hampi. Check-out from your hotel and join your chauffeur for the (approximately) seven hour drive to Hampi. Although this is going to be your longest road journey, the reward at the end is well worth it. A packed lunch is provided from your hotel for this journey.
Arrive at Hampi and check-in to your spectacular new luxury resort. Located just a few minutes drive from the amazing monuments of Hampi, this boutique Hotel is a great boon to tourism in Hampi as, up until now, the only lodging options were very Spartan and locate almost a 30 minute drive from Hampi, in the town of Hospet.


Day 6: Hospet. Start your exploration of the awe-inspiring sites at Hampi. Traces of a two millennia old civilization have been found at Hampi, but the UNESCO World Heritage Group of Monuments at Hampi are a mere five to seven centuries old. Hampi was the last
Capital of the Great Vijayanagar Empire, and the incredible monuments here are definitely matched by the amazing scenic landscape that is strewn with massive boulders. The landscape is surreal and breathtaking. Amidst hundreds of square kilometers of granite hills and boulders are the remains of a civilization that was unmatched in its heyday.
It is our opinion that Hampi, along with the Taj Mahal and the caves at Ajanta & Ellora, make up the most impressive attractions in a country that is overflowing with magnificent achievements made by ancient and medieval man. Two days of exploration at Hampi are a must to be able to really savor the amazing city and its granite monuments. Although there is evidence of a civilized society in this region from about 2000 years ago, what you will primarily experience are the remnants of the Vijayanagar Empire that thrived here from the 14th - 17th centuries, and the spectacular otherworldly landscapes. The estimates of the local population during that period range from over 500,000 to almost a million residents, and the city was said to have been surrounded by an army of about a million soldiers. The streets and bazaars (remnants of which are spread all over the 30 square kilometers of the Site) were so safe that traders dealt in precious stones in the open. The incredible stone aqueduct dots part of the landscape, as do various tanks and stepwells. Through this other worldly environment flows the picturesque Tungabhadra River, creating an image that a visitor will never forget.


Day 7: Hampi. Continue your guided exploration of Hampi. Between the day before and today you will visit sights such as the amazing Malyavanta Raghunathaswamy Temple, the Elephant Stables, the House of Victory, Pushkarini Tank, and the famous Kings Balance. You will also visit the Hampi Bazaar and the neighboring Virupaksha Temple. There has been a temple on this site since the 7th century, and the current incarnation stands over 150 feet high. One of the most amazing complexes at Hampi is the Vitthala Temple and its surrounding monuments. Awe is too mild a word to describe what most visitors feel when their Easy Tours’ guide illustrates the many incredible facets of the monuments here, such as the Hall of the Musical Pillars and the stone chariot.