Day 1: Arrive at Delhi - most flights arrive either in the evening or at night, and we strongly recommend that our guests consider arriving a day earlier as this allows you to recuperate from jetlag, and serves as insurance against international flight delays and cancellations. The cost of an additional nights Hotel stay can be quoted upon request.
Our services begin here. You are greeted at the airport by an Easy Tours Travel Facilitator and ushered to a chauffeur driven vehicle. You are then driven to your hotel and assisted with your check-in. The next day’s plans are briefly reviewed and you are presented with your welcome package. Among other things, this package includes a beautiful journal for your explorations, travel documents such as your air tickets and hotel vouchers, as well as copies of documents (such as our General Travel Guide) that were sent to you earlier.


Day 2: Delhi. Begin your exploration of India with a guided city tour of New Delhi. This excursion begins with the awe-inspiring Qutab Minar (1193 A.D.). This 239 ft tall medieval tower is a symbol  of victory and a beautiful example of Persian architecture from that period. There is a winding stairway inside the tower that goes up all the way to the balcony at the very top of the tower – unfortunately they are no longer accessible for visitors. The Qutab Minar and its Monuments are also a UNESCO World Heritage Site. Within the Qutab complex, 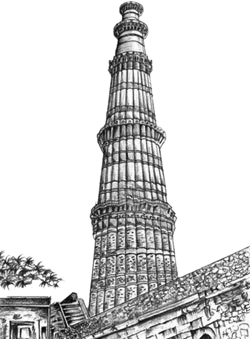 amidst the ruins of the Quwat-ul-Islam Mosque, stands one of the legendary Ashoka Pillars. This large iron pillar has withstood the ravages of Delhi’s weather (and recent pollution) and has not rusted in over 1500 years. After the Qutab complex you will be driven to visit the magnificent tomb of the Mughal Emperor Humayun. Delhi has such an abundance of amazing monuments that this Tomb Complex (1562 A.D.) does not quite get the acclaim that it deserves. It is a UNESCO World Heritage Site and its amazing architecture and the elaborate gardens will captivate you as your guide explains the unique architectural and historic facets of this monument. From here you will drive through Lutyens’ New Delhi. This drive will include photo opportunities at the following attractions - the exterior of the massive and awe-inspiring Rashtrapati Bhawan (known as Viceroy’s House during the British era) and Delhi’s landmark structure India Gate.
There is a break for lunch.
Afternoon - enjoy a city tour of Old Delhi. Drive, walk and ride through the ancient city’s streets and alleys; explore crowded and colorful bazaars. This excursion includes an exploration of the Jama Masjid (1650 A.D.), the largest mosque in India. The Masjid (Mosque) is a magnificent example of Mughal architecture and is constructed of red sandstone and white marble. It is an active place of worship and its courtyard can hold 25,000 worshippers. You continue on to the amazing Red Fort that was finished a decade before the mosque. Both structures were built by Shah Jahan, the emperor who created the Taj Mahal. The great city inside the massive  sandstone walls of the Red Fort offers visitors a large number of architectural and historical attractions; it was once known as the 8th wonder of the world. The Red Fort was the seat of the Mughal Empire for more than two hundred and fifty years and is also a UNESCO World Heritage Site. It is an amazing example of a blend of Persian, Indian and European architecture. You will also experience a fascinating rickshaw ride in the ancient alleys of the crowded and colorful bazaar at Chandni Chowk. After this a short drive will deliver you to an oasis of calm and serenity, which also happens to be your last destination in Old Delhi. The cremation site of Mahatma Gandhi (Raj Ghat) is a simple yet stirring memorial to the father of the nation. Lush lawns extend beyond the enclosure surrounding the black marble platform occupying the spot where the Mahatma was cremated. An eternal flame burns next to the platform.


Day 3: Delhi - Agra. Check-out from your hotel in the mid-morning and you are driven to Agra on North India’s newest highway. Arrive at Agra and there is a break for lunch at a popular local restaurant. After lunch, you will be driven to your hotel, 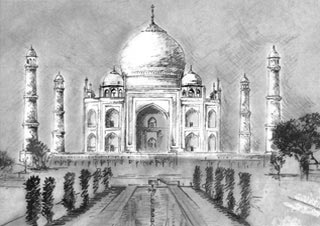 where you will be assisted with your check-in.
Afternoon - you will  visit the first red sandstone fort of North India, the Agra Fort, a UNESCO World Heritage Site. It was built in 1565 by India’s greatest Mughal ruler, Emperor Akbar. Its royal audience halls, immense stone courtyards, marble mosque and the private royal chambers give us a glimpse of the grandeur of the Mughal Empire.
Enjoy a sunset visit to one of the Seven Wonders of the World, the incomparable Taj Mahal. The world’s greatest monument dedicated to love is obviously a UNESCO World Heritage Site. The Taj Mahal was completed by Emperor Shah Jahan in 1653 A.D. as a memorial to his beloved queen Mumtaz Mahal. This spectacular white marble mausoleum was created by about 22,000 skilled craftsmen and it took twenty two years to complete. When you experience the Taj Mahal with an Easy Tours Tour Guide who shares unique insights into its innumerable facets, some of their passion for this masterpiece may rub off on you. Explore the amazing Taj and its surroundings until it is time to admire the sun’s rays setting on the façade of the world’s finest monument.


Day 4: Agra - Jaipur. Enjoy a visit to the magnificent Taj Mahal at sunrise - the best time to see it during most of the year! Due to it being more expensive for Indian tourists at that time, and the early hour, the massive monument and its surrounding Mughal gardens are a lot less crowded than in the afternoon. As the rising sun’s rays illuminate the precious stones inlaid in the marble, they will gleam momentarily as the marble’s color changes. You will return to your hotel to freshen up and have breakfast after the excursion.
Check-out from your hotel and then you are driven to Abhaneri. You can either get a packed meal from your resort, or, before your arrival at Abhaneri, you have the option to stop for lunch at a reasonably priced nature resort that serves organic and all natural food, most of which is freshly picked from their estate. Chand Baori is a unique monument that is located next to a charming Rajasthani village. Please note that the local guides in Abhaneri are not as proficient in the English language as the guides you will have in other destinations, and their accents can be hard to understand. The massive 10th century Chand Baori stepwell is one of the most impressive in all of India. The depth of the stepwell is that of a modern 7 storey building, and there are stairs leading down to the bottom from three of the 100 foot plus (35 meters) four sides of the opening. Enjoy a guided exploration of the stepwell and then you will walk through the small village to get a glimpse of the lives of the simple but proud Rajasthani villagers. There will be young boys and girls herding goats, sheep, and cows around the area, camels carrying loads for their owners, and many other experiences that are only found in rural India. There are potters huts that you can stop at, as well as ladies weaving traditional garments, as well as opportunities to view many other indigenous activities. This is not a disguised effort to sell local wares, as is often found in tourism destinations. These are real villagers, and their simplicity, warmth, and hospitality will captivate you.
After this you will continue on with your journey to Jaipur. Check-in at your hotel upon your arrival at Jaipur.


Day 5: Jaipur. Start your day with an excursion to the Amber Fort and Palace, a UNESCO World Heritage Site, located a short distance from the walled city. Just like the Emperors of a few centuries ago, enjoy the ascent up to the ramparts of the fort on top of a colorfully caparisoned elephant. If you prefer not to ride the elephants, you can be driven to the rear entrance of the monument.

The massive Fort complex was originally built by Raja Mansingh and is one of India’s finest examples of Rajput architecture. Explore the chambers and hallways, which are famous for their exquisite designs and handcrafted embellishments.  Return to the valley beneath the Fort and there is a break for lunch.
During the afternoon you will take a stroll with your guide through the Pink City’s main bazaar in the heart of the old town, and watch the locals as they bargain for their everyday necessities.
Continue your exploration of the walled city of Jaipur, including the magnificent City Palace. You will visit Jantar Mantar (a UNESCO World Heritage Site), which is the fascinating stone observatory built by Raja Jai Singh in 1728. Among other instruments, it includes a giant sun dial that is accurate to within 2 seconds. After the observatory comes a photo opportunity of the Hawa Mahal (Palace of the Wind). This intriguing facade was built in 1799 so that the ladies of the court could use its unique windows and observe the bustling bazaar without being visible to the people on the streets. Continue the tour with an exploration of the City Palace, the former royal residence (a part of which is still occupied by the Royal family and is not accessible to the public), built in a blend of Rajasthani and Mughal architectural styles. This immense complex also houses a number of museums that offer a large and impressive collection of costumes, armory and miniature paintings.
Return to your hotel in the evening.


Day 6: Jaipur - Delhi - International Flight. You are assisted with your check-out from your hotel at your choice of time in the morning (anytime before noon, depending on the time of your international flight) and then you are driven to the Delhi airport where you are assisted with boarding your international flight.
If your flight departs late in the evening or the very early morning, your vehicle and chauffeur are available to you until your assisted check-in at the airport. This is a good time to do some last minute dining and/or sightseeing if you are so inclined. If your flight departs early the next morning, you may want us to arrange a room for you so you can rest.
Our services end at Delhi airport.